Are we still in business?   Absolutely, and we will be as long as this site is up.

Scroll down to see the many DIY troubleshooting topics below

Please go through the following DIY list; if you don’t see what you are looking for, you can look through the Q&A and/or ask a new question about your sprinkler timer.

This do-it-yourself page will help you troubleshoot and diagnose problems with the Irritrol Rain Dial RD-600 and other irrigation systems.  We don’t want you to send in a sprinkler timer in for repair if it doesn’t need it. Click the links below to navigate the troubleshooting sections.  If you’re asking “How do I …”, keep reading.

DIY troubleshooting “How do I …” sprinkler timer related topics

Here is a video showing common symptoms that indicate when a Rain Dial Controller needs to be repaired.

If this information wasn’t enough to resolve the issue, we can help:
Send Rain Dial Timers in for repair? 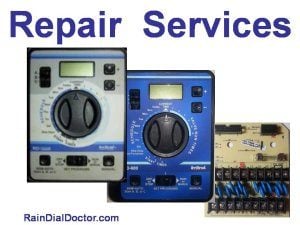 For other issues, or ones that are in progress and do not have a link yet, just contact us, or see details here: How do I send it in for repair?

Make a "Thank You" Donation or Payment